Former University of Hartford men’s basketball star Kenny Adeleke was taken as the second overall pick in the 21st annual Continental Basketball Association College Draft last Tuesday.
The Butte Daredevils, an expansion team making their debut for the 2006-07 season, took Adeleke after the Minot Skyrockets took former Syracuse player Dayshawn Wright with the first overall pick. The Daredevils will play their home games at the Butte Civic Center in Butte, Montana.
In his final year at Hartford last season, Adeleke was an America East All-Conference First Team selection as he lead the conference in scoring with 20.7 ppg. and rebounding with 13.1 rpg. In his only season with Hartford, Adeleke earned a record eight conference player of the week honors. In 28 games last season, Adeleke posted 24 double-double games, both a school and conference record for most in a season.
Currently in Seattle, Adeleke is hoping to make the Sonics roster after he was extended a nonguaranteed contract by the team.

The Hawk's opened their first conference action of the season spliting the weekend doubleheader against Albany. The Hawk's split the first series on Saturday with…

The Volleyball team fell to 5-7 overall after their 3 set to 1 loss to St. Peter's on Tuesday. This weekend Hartford travels to Quinnipiac for a one day tournament. 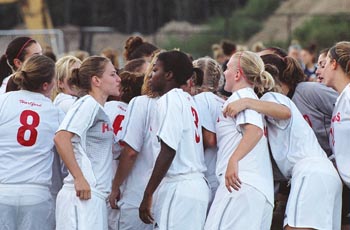