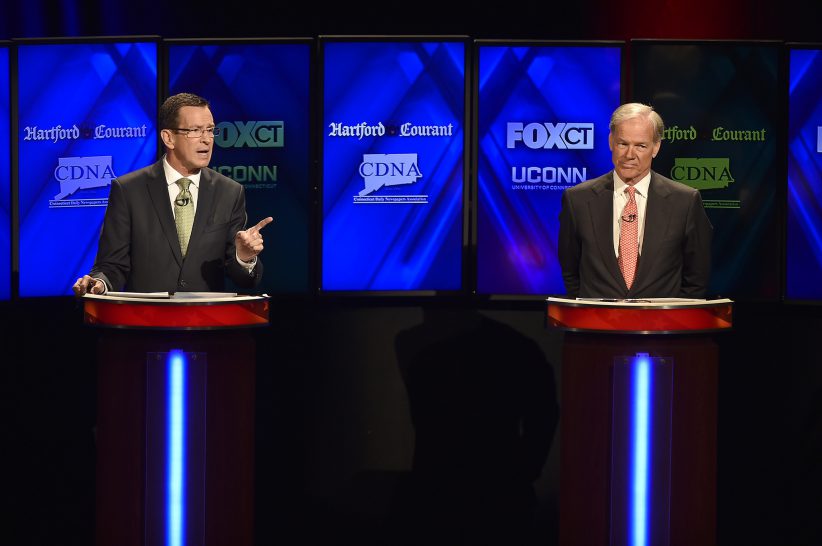 The debate itself started off typically enough – with incumbent Gov. Dan Malloy describing his accomplishments, touting the 60,000 jobs created while he and Lt. Gov. Nancy Wyman were in office, and his Republican challenger Tom Foley refuting those claims – but it quickly got personal.

“You’ve said six or seven things that simply aren’t true,” Foley said nearly halfway through the debate, referring to Malloy. “And I hope when this debate is over that the media will look into it and vet these things. There’s no reason, sir, why anyone should believe anything you’re saying here tonight.”

Gov. Malloy waited to respond to many of Foley’s statements until the final three minutes of the debate, saying “Tom has attacked my integrity several times tonight, and I’ve kept quiet about it. But I want to say this, Tom, that that’s not the way we treat one another. And certainly, someone in a glass house probably shouldn’t be throwing stones.”

Both candidates dug up scandals involving the other – Foley referenced a corruption investigation into Gov. Malloy back in 2005 when he was mayor of Stamford, Conn., and Gov. Malloy referenced both an incident in the 1980s when Foley was arrested for a car crash, and a more recent incident when Foley did not report that arrest to the FBI. The vitriol continued after the debate.

Malloy defended his reference to Foley’s car crash later in a press conference, saying “If he’s gonna question my integrity…I never lied to the FBI. I never lied to the FBI! I’ve never been arrested! That’s who I am and what I am. I never drove my wife off a road. I never did those things. And I think it’s fair…if he’s gonna raise it – and he raised it – it’s fair to raise it.”

Foley avoided questions about the incident itself, and said that Gov. Malloy was bringing up things that had nothing to do with the race. “He’s talking about things that happened a long time ago, and most of them aren’t even true…and they don’t have anything to do with Connecticut’s future,” he said.

Foley said he offered the governor a truce to stop the negativity of the campaign, saying, “Maybe the governor will accept my offer of a truce and let’s move forward and be positive.”