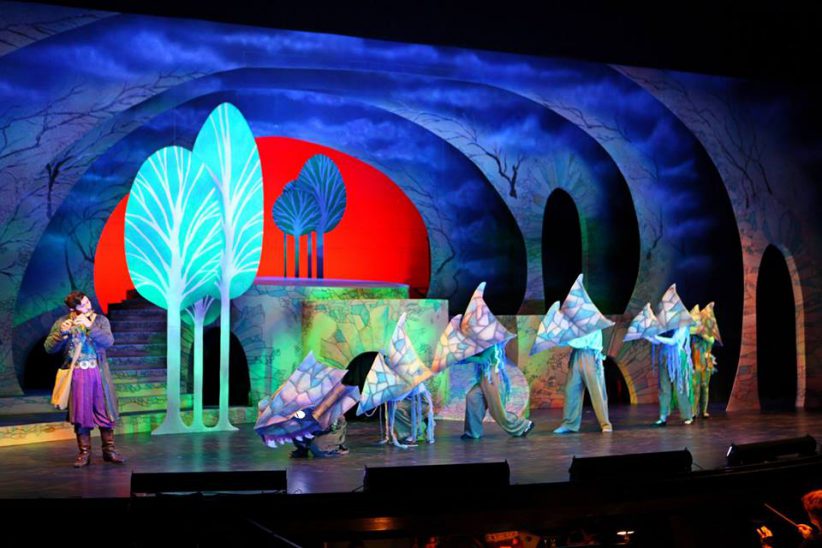 Set of The Hartt School's performance of 'The Magic Flute"

After opening night on January 29th, the Hartt School is putting on three more performances of the opera, ‘The Magic Flute’, on January 30th, 31st, and February 1st with a cast and orchestra made up entirely of Hartt students.

The opera is technically a singspiel, an opera made up of both spoken dialog and singing. The opera is typically performed in the vernacular, as it will be at Hartt. Because of the wide range of voices, the Hartt School will project the lyrics to the singing portions of the opera on a screen above the stage, so they are easily understandable to those in the audience.

The opera is personalized through the director’s choice of where it takes place, what form some non-human characters will take, etc. However, the story is the same; it centers around a man and his journey for love and enlightenment, according to the show’s conductor, Doris Lang Kosloff.

“It shows the dichotomy between the world of light and dark,” Kosloff said, “Between truth and deception, and between love and hate.”

Some of the roles in the Hartt School’s production of ‘The Magic Flute’ were triple casted, which along with the blizzard and school cancellations, made for a lot of hard work.

“We do have long rehearsal schedules,” said Evan Gutierrez, a junior performing in the opera, “I think it’s been worth it…We’ve all had a lot of fun, a lot of comradery, really putting our all into this work.”

“I just hope they enjoy the comedy of it,” Liz Oman, a fifth year senior performing in the opera, said, “There’s lots of parts that are super fun and there’s a love story, so I just hope people enjoy it and like the music.”

Ticket prices and other information can be found online at harttweb.hartford.edu.

The University's gospel choir is a large group of students who get together each week for prayer and gospel music. Their president, Shantal Russell, sat down with…

Eiko Johnson '65 and Richard Cardin '62 were awarded the first College of Arts and Sciences Board of Advisors Alumni Awards. The ceremony was held on April 21st,…

Witty, focused, stern, but most of all, inspiring. Just a few of the characteristics that surface when people speak of former Hartt Dean Malcolm Morrison. His recent…