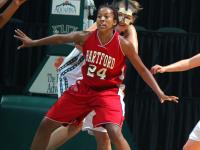 This past monday night the womans basketball team took on Texas A&M in the second round of the NCAA tournament for a chance to be one of the Sweet 16 for the first time in school history. Texas A&M prior to the tournament was ranked as low as number eight in the country and they showed why in thier contest with the Hawks. As a matter of fact the Aggies forced the Hawks into twenty five turnovers and keeping the Hawks off the board as far three pointers go. The Hawks had a stunning, no three pointers in the game for only the second time this season, alot of credit going to the tough man to man defense of the Aggies. Without the three Hartford just could not find enough ways to score in the paint as they fall in the second round 63-39 ending the college career’s of Danielle Hood,Courtney Gomez and Jamie McCabe. Although it was a tough loss the Hawks did have a very positive season and alot to look back on.
During the season the Hawks set a school record for most wins with 28 including another win over a ranked opponent in Michigan State. Also, the senior class will graduate with the most wins in a four year period along with being part of the first team to ever win in the NCAA Tournament when they defeated Temple.Danielle Hood will graduate as hartford’s second all time leading scorer while leading the team ins scoring this season. Along with many other great accomplishmenstlike winning the America East Championship and regular season championship. The Hawks have alot to look forward to next season and on that note so do the fans as the anticipation will be mounting over the coming months. 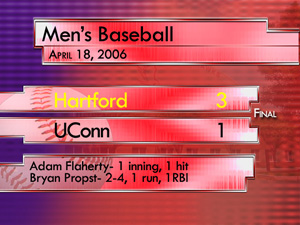 In a rematch of the game called due to snow back in March, Hartford is able to top UConn this time around, winning 3-1. Sophomore John Coury started, pitching three…

Due to vandalism last semester, maintenance was needed to repair the doors, almost daily, so facilities and Res Life made the decision to remove all doorknobs and…