The Pentagon released footage of "unexplained aerial phenomena" to clear up misconceptions.

The three videos had already been circulating the public since 2007. Two of the videos were released by the New York Time and the third was leaked by Tom DeLonge’s UFO Organization, To the Stars Academy of Arts and Sciences.

“After a thorough review, the department has determined that the authorized release of these unclassified videos does not reveal any sensitive capabilities or systems, and does not impinge on any subsequent investigations of military air space incursions by unidentified aerial phenomena.”, the Pentagon released in its statement. 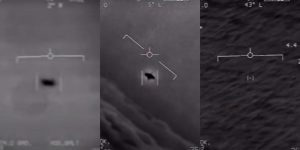 One video was filmed in 2004 by two navy fighter pilots and the other two were filmed in 2015. The 2004 footage shows an object hovering above the Pacific Ocean. The 2015 videos show objects moving through the air with one spinning.