On This Day: Bobby Orr scores the famous "The Flight" goal and the Bruins win the Stanley Cup

STN Channel 2 / Sports / Bobby Orr Scores Winning OT Goal and the Bruins Win the Cup
Share on FacebookTweet this!
On This Day

On this day all the way back 50 years ago the Boston Bruins defeated the St. Louis Blues 4-3 winning the Stanley Cup, with a 4-0 series win. Game 4 ended with some dramatics as hall of famer Bobby Orr slotted in the winning goal for the Bruins creating the famous “The Flight” shot of him flying in the air after he was tripped by Blues defenseman Noel Picard after scoring the winning goal.

This became the Bruins 4th Stanley Cup victory in their history and their first one in 29 years. On the 40th Anniversary of the goal back on May 10th, 2010. The Boston Bruins unveiled a statue of  “The Flight” right outside of TD Garden in Boston, so the moment could be remembered forever. 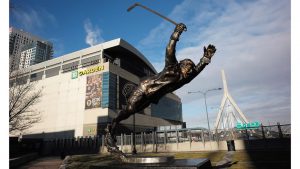 The Bundesliga to Start Back up in May

Just like in the United States, countries around the world are suffering from the coronavirus. As we pass a total of 50 days without sports and land on day 51 today,…

Dear Kansas City Chief Fans,  I know your Sunday did not go to plan and it ended in misery as you along with all 96 million people watching, saw Tom Brady and…

And we’re going to take it all the way back to April 8th, 2013 when the Louiville Cardinals won their “third” National Title against the Michigan Wolverines…

The San Diego Padres had one of their best seasons in recent memory last year, by making the playoffs for the first time since 2006 and with the moves that were…

On this day in 2013 it marked the last time that Manchester United were at the top of the English Premier League. 7 years ago today the Red Devils defeated Aston…

With every school in America turned to online learning because of the current Covid-19 pandemic, schools also need to make budget cuts now. The University of Cincinnati…

It has been a total of 39 days without sports and sports fans would do anything to make them come back as soon as possible, and Dana White could be that savior…

The 2020 NFL Draft took place on Thursday night and it made history becoming the first online draft in NFL history, due to the coronavirus. The process of…

The NBA to Start Back up on July 31st

The NBA has been out of commission since March 11th, when Utah Jazz center Rudy Golbert tested positive for Covid-19, and after the NBA suspended their season for…